For a PDF version of the following press release, click here. 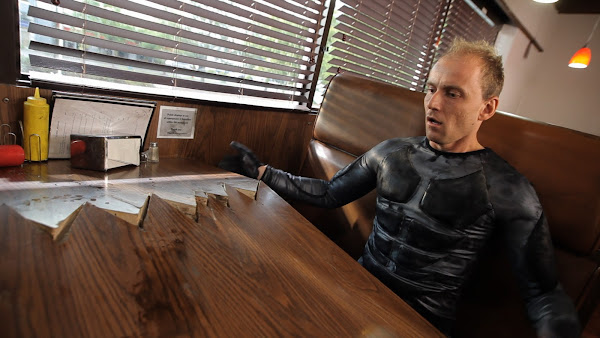 The highly anticipated award-winning films of the Film Racing Grand Prix were announced this evening. The international filmmaking competition, produced by New York-based NYC Midnight Movie Making Madness, challenges teams from around the world to create a 5-minute short film in only 100 hours. On Thursday, September 29th, filmmakers were e-mailed a theme, prop, and action and had until Monday, October 3rd to write, shoot, edit, and upload an original short film.

Seventy-three teams from around the world entered the competition. Of those, fifty-six were American, fourteen were Canadian, two were from Great Britain and one was Australian. Four Canadian teams made the top-twenty shortlist. Repair Man, a subtly comedic superhero spoof produced by Vancouver multi-media theatre company The Virtual Stage and directed by Andy Thompson, was the top-ranking Canadian film of the contest, and finished third in the competition overall.

Thompson plans to re-edit the film and then submit the new director’s cut to the 2012 Cannes Film Festival. Last year, his film The Provider – directed by Brianne Nord-Stewart and starring venerable Canadian actress Gabrielle Rose – won the overall grand prize award of the Bloodshots Canada 2010 48 Hour Horror Filmmaking Challenge (produced by Big Smash! Productions and The Celluloid Social Club). The film then went to the 2011 Cannes Short Film Corner where it was honoured with a “Coup de Coeur” distinction and screened as one of the best shorts from Canada, before being selected at the 2011 Vancouver International Film Festival.

“I knew we had a strong overall film,” Thompson said today, reflecting on the third place finish of Repair Man. “But to be honest, I didn’t know what to expect in terms of awards. For example, I thought that Corwin Ferguson was a particular contender for recognition in the Best Visual Effects category. But we had strength in all areas. Then, having won no individual awards we took third place overall, which really speaks to the success of what our team accomplished collectively. It reflects the incredible dedication and teamwork that went into this film. We had a cast and crew of fifty people work agonizing hours just for the love of making movies. So I’m really pleased and excited that we came away with the bronze. And to be the top-ranking Canadian film of the contest is a real treat and a tremendous honour.”

To view the film and learn more about the team behind Repair Man, visit The Virtual Stage’s website at www.thevirtualstage.org/repairman. To view all of the top-twenty films, visit the Film Racing website at www.filmracing.com.