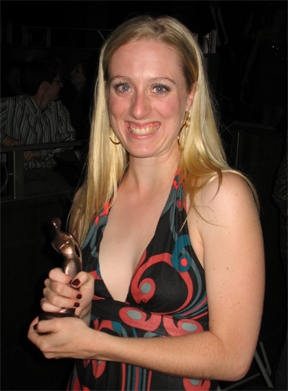 Two artists involved in The Virtual Stage's production of SPANK! were honoured last night at the 25th Annual Jessie Richardson Theatre Awards at the Commodore Ballroom. But not in ways that they necessarily expected...

Sasa Brown, who played multiple characters competing for control over the virtual body of 'Flower Vines' in SPANK!, was held by many as the favorite to win the Jessie for Outstanding Performance by an Actress in a Supporting Role. As expected, she took the award, accepting it in a charming speech that was one of the highlights of the night.

The Virtual Stage's Artistic Associate Jamie Nesbitt was surprised when he was called to the stage for an award he didn't even know he was being considered for: the Jessie for Most Promising Newcomer. In another touching speech, the promising visual designer spoke of his passion and love of theatre, and then the irony of a "video guy" making such claims. This marked the second time a designer has won the Most Promising Newcomer award after working on one of our productions. In 2003, lighting designer Itai Erdal grabbed the honours after designing the lights for our acclaimed production of The Birth of Freedom.

In all, The Virtual Stage was nominated for three Jessies, with our artists taking home two. This brings The Virtual Stage's historical Jessie Richardson Theatre Award total over four mainstage productions in six years to six nominations, two wins and association with two Most Promising Newcomer award recipients.