Valparaiso a Hit With the Critics 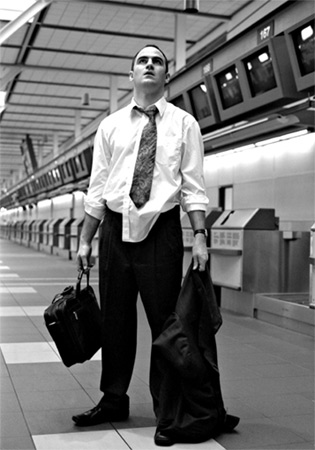 Michael Majeski, an ordinary businessman, heads out on a routine plane ride to Valparaiso, Indiana, but ends up in Valparaiso, Chile. The press catches wind of his misadventure and turns him into a "media darling" overnight. As Majeski's fame grows, his personal life erodes in front of the cameras; a creation of the media, he is caught between sanity and celebrity. Valparaiso, DeLillo’s second play, is a funny, sharp and deep reaching story about how the media shapes our lives. This devastating and chillingly entertaining play makes us look with unwavering directness at the world we inhabit – a world in which the virtual and the real are skewed.

“Well-realized theatrically… Playwright Don DeLillo's Valparaiso explodes into philosophical fireworks… You have to wait for the stimulation in Valparaiso, but when it comes, it floods your synapses.”
Colin Thomas, Georgia Straight

"Andy Thompson gives a bravura performance as a man who has misplaced not only his body, but his soul. So superbly subtle is his acting that the audience sees his persona crumble molecule by molecule. By the time he and Livia, played with feral precision by Diana Swayze… they are as vulnerable as cattle at a slaughterhouse.”
The Globe and Mail

Valparaiso is produced by The Virtual Stage Co-op
Valparaiso opens Saturday May 8 at Performance Works and runs through May 22.
Performances are Tuesday through Saturday at 8:00 p.m. Preview Friday May 7.