On Death's Door: Plague of the Zombie Syndrome 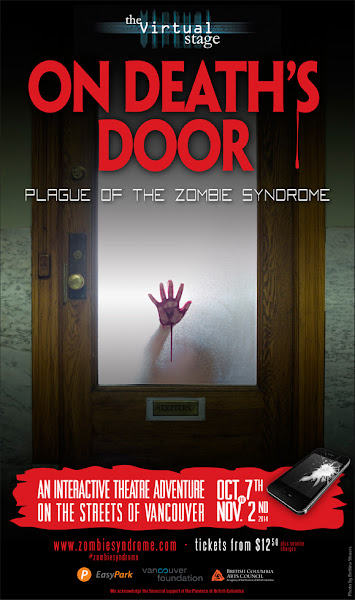 Check out the 2014 Audience Leaderboard here!

What They're Saying About On Death's Door: Plague of the Zombie Syndrome

"Best zombie/Halloween activity in Vancouver, and I've done it all. Take some friends and blow their minds"
- Paul Connors via The Zombie Syndrome on Facebook

"We had an awesome time! Just wish there were more adventures throughout the year!"
- Meghan Edwards via The Zombie Syndrome on Facebook

"Much praise to @TheVirtualStage for the #ZombieSyndrome! Scary and super, super fun."
- Monica Vuong via Twitter

"Thank you to @TheVirtualStage for an awesome night last night - blew my mind!"
- Clinton Shard via Twitter

"Second year doing this and it was lots of fun....still haven't beat the zombies yet though. Well there is always next year to try again. My husband and I really enjoy doing this event."
- Tracy Carlson via The Zombie Syndrome on Facebook

"Our mission succeeded! And yet, the zombies are STILL loose on the streets of the city. The DND agents we interacted with were highly professional and a credit to our nation. Join now! If you have any interest in horror, interactive theatre, or ripping good yarns, you will want to attend the 2014 mission The Zombie Syndrome: On Death's Door. Help the Virtual Stage save the city...and the world...before it's too late!"
- William Gibson via The Zombie Syndrome on Facebook

"So should you go? Absolutely. It’s a fun night out with friends. The actors involved seemed to have a grand time in their roles, and improvised well off of the 'audience' cues. This chilling production of 'On Death’s Door: Plague of the Zombie Syndrome' is astounding. A sophisticated plot and talented actors keep you enthralled as you work with your team to try surviving the night. Trust me when I say, not everyone will make it out alive. All in all, it is a really fun and interactive way to get in some quality time with a big group of friends, or to meet some new ones when you join your fellow teammates! Andy Thompson has really outdone himself this year and it just keeps getting better. So thanks Andy, for successfully scaring the crap out of me again this year, I look forward to what is coming next!"
- Laura Sutherland & Amanda Miller Living Myth Magazine

"AHHHHHHHHHHHH!!! My friend and I did our part to assist with the outbreak last night! It was EPIC! I have not had this much fun...uh, I mean been so serious about a mission ever. The entire production was excellent. No spoilers, but you really do get to experience many different scenarios and areas. All the actors were amazing and made the entire night plausible (and SUPER fun!). It helps if you or some in the group get into it right away and are not shy to speak up. Remember, they are counting on us to help figure it all out. Time goes by quickly and you feel like you've accomplished A LOT by the end. A very well balanced night. I loved every bit of it and would recommend this to anyone who has a sense of adventure and wants to do something unique and very cool! THANKS to everyone involved for being so entertaining and professional!!! Can't wait until next year."
- AC via The Zombie Syndrome on Facebook

"Surprise is a big part of the fun... It’s fun to play downtown with a bunch of adults... Playing together may be the best inoculation we all have, our best protection from turning into zombies."
- Colin Thomas, Georgia Straight

"We did it last night and had a blast!! Hope we don't have to save the world again next year but if we are needed we will be there!!!"
- Denise Clarkson via The Zombie Syndrome on Facebook

"I did it last night too, so much scary fun. I'm glad that I was the Electrician!!! Will help save the world next year too!"
- Nancy Clarkson via The Zombie Syndrome on Facebook

"I can't wait to go next year! I had so much fun this year!"
- Jess Brady via The Zombie Syndrome on Facebook

Dramaturgy by THE CAST & CREW

(Vancouver, B.C.) A classified Department of National Defence video of an anonymous drug dealer explaining the lethal effects of a dangerous new street drug know as "Death's Door" has been leaked this morning.

A source close to the case has confirmed that the Centre for Disease Control has now teamed with Canada's Department of National Defence to analyze this new, highly addictive party drug that is rapidly turning countless people into violent, cannibalistic zombies. The Death's Door drug, which is sold in pill form and can be swallowed, snorted, smoked or injected appears to have been laced with the same Zombie Syndrome virus that has plagued ‪#‎Vancouver‬ streets for years. Organized crime is widely considered to be responsible for its creation and distribution.

The DND is calling all brave citizens to duty on an undercover mission to combat this ‪#‎zombie‬ ‪#‎plague‬ and infiltrate the criminal network responsible for this ‪#‎epidemic‬. Act Now!

SAVE THE WORLD & BOOK YOUR MISSION TODAY!

Heed The Call To Duty! Your Country Needs You! You Are The Best Of The Best!

WARNING: THIS VIDEO CONTAINS TERRIFYING, GRAPHIC DESCRIPTIONS AND IMAGES THAT MAY NOT BE SUITABLE FOR YOUNG AUDIENCES. VIEWER DISCRETION IS ADVISED.

Deadly zombies have overtaken the streets of Vancouver! Citizens are being challenged with a high-stakes mission to save the world before the deadly Zombie Syndrome spreads across the globe, destroying mankind.

Unfortunately, the Centre for Disease Control has recently discovered that the genetic material active in the Zombie Syndrome virus is somehow being laced in a highly potent and extremely addictive street drug known as “Death’s Door.” Officials from the Department of National Defence, desperate for reinforcements, are once again calling audience members to duty.

In this all-new interactive, smartphone-enabled, thrill-seeking and clue-breaking adventure, audiences must infiltrate the shady criminal network responsible for creating and distributing the Death’s Door drug, stem the pandemic, and save the world. Elite participants will be informed of the secret location’s rendezvous point in Vancouver, BC from October 7 to November 2, 2014.