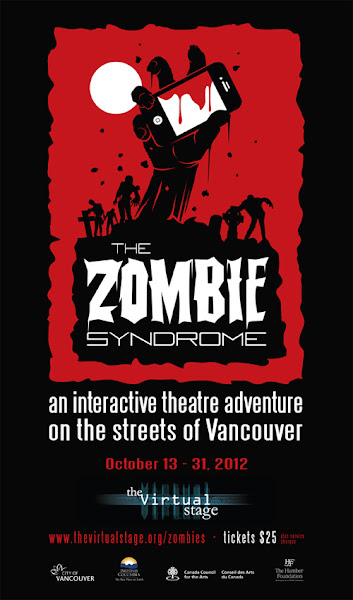 The Zombie Syndrome on The Rush

A surprising trek... Makes for some kidlike fun... I was so into it and so determined to protect the innocent that I might have derailed the performance if firm hands hadn’t stopped me...  It's kind of a trip and it's original.
- Colin Thomas, Georgia Straight

A rollicking good time, and definitely something out of the ordinary. It’s a great concept and I’d love to see more takes on this type of roving audience participation theatre in the future.
- Kimberley Davison, vanvantage.com

It’s a brilliant concept, and wonderfully crafted by The Virtual Stage. I honestly want to spill my guts about this experience, but you really have to see it for yourself!
- Dan Culic, Homorazzi

This unique theatre experience is as close as anyone can get to making “Choose Your Own Adventure” books a reality...  The factor of surprise is what makes this production so special...
- Anja Savcic, Vancouver Weekly

I had fun and really enjoyed the innovative concept of this show...  Worth checking out...
- Tessa Perkins, Press+1

Vancouver seems to have set a standard for site-specific theatre... The Virtual Stage – which specializes in multi-media presentations – has taken things a step further with The Zombie Syndrome... A uniquely fun adventure...
- David C. Jones, The Charlebois Post

Writer and director Andy Thompson effectively puts us on edge early into the show, as we quickly found ourselves constantly looking over our shoulders for the next zombie interaction...  What could be described as The Amazing Zombie Race, the prize at the end of The Zombie Syndrome isn’t a million dollars, but the supposed satisfaction in knowing that you (hopefully) saved mankind.
- Mark Robins, Gay Vancouver.net

Dramaturgy by THE CAST & CREW

Please click on a specific date to see the cast and makeup artists working that day:

The Canadian Government's Call For Your Help

Just back from The Virtual Stage's production of The Zombie Syndrome! It was fantastic, and I highly recommend it! Probably one of the best interactive shows I've been on - lots of fun, and some big plot twists along the way. The rain didn't hurt one bit!
- Megan Gray

Thanks Andy Thompson & The Virtual Stage for The Zombie Syndrome!!! This is the most interactive theatre I've ever experienced! A brilliant concept, and so much fun!
- Dawn Zoe

Went to the 3:30 show today and our entire group had an amazing time!!! So fantastic, everyone involved was fun, and did a great job! We can't wait till next year - will definitely be back!
- Heather Cook Anderson

So amazing. Wonderful acting, stupendous make up. Wish I could see it again!
- Teri Walker

I was there too and couldn't agree more! Well done, what a great adventure!
- Karen Bond

We had a great time tonight on our zombie adventure. Thanks so much to the cast and crew - you were all amazing!
- Lisa Wylie

Did the Zombie Syndrome today and had a blast! Kudos to all those who made such a fun afternoon. Time and money well spent. Thanks!
- Jeanne McKinlay Hansen

This show was awesome.
- Evelyn Chew

Great job Guys! Went to the show on Wednesday. LOVED how interactive it was! Are you going to be doing another one? Maybe we have to save Santa!
- Shannon Boudreau

Had so much fun at #ZombieSyndrome by @TheVirtualStage, I had to do a video review. youtu.be/kpN3vIXfLh4
- Justin Saint

Had an AMAZING adventure tonight!! I LOVED IT!! @TheVirtualStage #ZombieSyndrome
- Dru Chan

Had a blast at #ZombieSyndrome. A clever idea perfectly executed. Actors were fantastic, can't say enough about how great it was! Go see it!
- Brent Furdyk

"The Zombie Syndrome" was an awesome experience by The Virtual Stage, looking forward to more.
- DJMissBlue

ZOMBIES IN VANCOUVER! Had so much fun doing #ZombieSyndrome
- Kerry Morrow

#zombiesyndrome awesome experience this Saturday! Loved the 'adventure'! Great use of tech in an innovative way. Thanks.
- Helen

#zombiesyndrome wicked awesome fun! Hope they do it again next year
- Lisa Mack

Saw a preview of The Zombie Syndrome last night. What an entertaining, unique performance, check it out!
- Ruven K.

@TheVirtualStage It was a really fun experience :) Thanks for putting on such an awesome show
- Allan C

Zombie Syndrome was so much fun!
- SeaPotato

The zombie syndrome was actually a lot of fun!
- Neven Szary

It was a blast, even in the rain.. zombies don't care about the weather!
- lopezdee