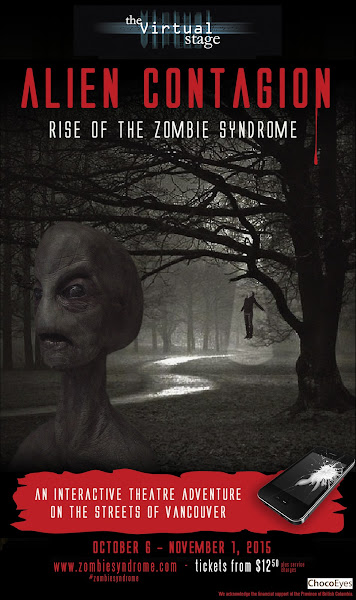 *** SECRET SPONSOR REVEALED! ***Now that the "Alien Contagion: Rise of The Zombie Syndrome" has come to a close, we...

Posted by The Zombie Syndrome on Monday, November 2, 2015

Check out the 2015 Audience Leaderboard here!

The Virtual Stage presents an all-new, immersive and spine-tingling theatrical adventure with Alien Contagion: Rise of the Zombie Syndrome - running October 6 to November 1, 2015 - at a top-secret location in Vancouver. This dramatic and gripping new production marks the fourth year of the company’s smash-hit Zombie Syndrome Halloween event, which has previously seen teams of audience members working together to save the world and conquer the undead in downtown Vancouver (2012), on Granville Island (2013), and in Gastown (2014).

Rave Reviews For
Alien Contagion: Rise of The Zombie Syndrome

The perfect combination of interactive theatre and flawlessly executed haunted house. In fact, the show is so immersive that it will make you question if a zombie apocalypse is actually happening... 'Alien Contagion: Rise of the Zombie Syndrome' is a night of frightening, adrenaline-inducing fun that shouldn’t be missed. If you love Zombie movies, this is the perfect opportunity to feel like you’re really in one.
- Cassady Ranford, VanCity Buzz

We saved the world, for now. Thanks @TheVirtualStage for a crazyfun #ZombieSyndrome Def one of my fave October events! #theatre #interactive
- Johanna M Ward, TV host, Producer, and Presenter, via Twitter

A grand adventure... And while the zombies can be held back by the beams of your flashlight, the group I was with decided to scream and run whenever they appeared. The result was a giddy and thrilling adrenaline rush as we often found ourselves running in the dark while zombies snarled and clawed at us.
- David C. Jones, Vancouver Presents

Way. Too. Much. Fun! Thank you for an incredible experience! I can't wait to do this again next year. We had so much fun, I couldn't stop laughing whilst running from zombies! I highly recommend this FUN FUN event.
- Kim McLeod via Facebook

@MrAndyPants thanks for the amazing zombie show! Scared the urine right out of me! #aliencontagion #riseofthezombiesyndrome #vancouver
- Lori G via Twitter

What a great event. Even though we didn't save the world it was an experience to remember as you are swarmed by zombies and aliens.
- Gary Jones via Facebook

So awesome! Great job everyone. I was so scared I soiled my armour...
- Mark Richardson via Facebook

This year, audiences are tasked to respond to a highly confidential NASA report about a downed Unidentified Flying Object that has crashed on earth. The exact location is unknown. To add to the mystery, the alien pilot is reportedly injured, has escaped and is hiding in Vancouver. Furthermore, every NASA official sent to locate the UFO has returned in a zombie-like state. In this interactive, smartphone-enabled and clue-breaking adventure, brave and adventurous audience members must find the downed spacecraft, quell the nearby zombie uprising and ultimately save the human race from the brink of extinction.

Disclaimer: Rated PG-13. Contains zombies and other mature subject matter. Children under the age of 13 need to be accompanied by a parent or guardian.

For more information, updates, and declassified information regarding this year’s mission, follow The Virtual Stage on Twitter: @TheVirtualStage, ‘like’ The Zombie Syndrome on Facebook, or visit The Virtual Stage’s FAQ page. Be sure to tweet about your mission’s success or failure and announce your team’s score with the hashtag: #ZombieSyndrome.